This is the part two to the previous post which was about corporate muslimahs having best of both worlds. This list includes those exceptional women who inspire us in this era of ours.

NB: this list is nowhere near complete. There are millions of wonderful and inspiring women out there. For the sake of discussion, please share with us those corporate muslimah who inspire you in the comment section. :) 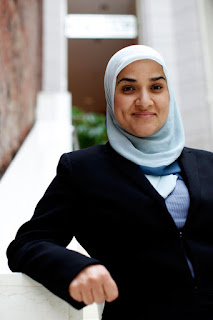 Dalia Mogahed (born 1974) is an American scholar of Egyptian origin. She is the Director of Research at the Institute for Social Policy and Understanding (ISPU) in Washington, D.C. She is also President and CEO of Mogahed Consulting, a Washington, D.C.-based executive coaching and consulting firm specializing in Muslim societies and the Middle East. Mogahed is former Executive Director of the Gallup Center for Muslim Studies, a nonpartisan research center that provided data and analysis to reflect the views of Muslims all over the world. She was selected as an advisor by U.S. President Barack Obama on the White House Office of Faith-Based and Neighborhood Partnerships.
Linda Sarsour is the executive director of the Arab American Association of New York.Sarsour has been called a "champion of change" by the Obama administration. Linda Sarsour is a working wife, community activist, and mother of three. Ambitious, outspoken and independent, Linda shatters stereotypes of Muslim women while also treasuring her religious and ethnic heritage. Currently she is the Advocacy and Civic Engagement Coordinator for the National Network for Arab American Communities (NNAAC), a network of 22 Arab American organizations in 11 states including the District of Columbia, nationwide where she conducts trainings nationally on the importance of civic engagement in the Arab and Muslim American community. Locally (in the states) she serves as the Director of the Arab American Association of New York, a social service agency serving the Arab community in NYC. Linda’s strengths are in the areas of community development, youth empowerment, community organizing, civic engagement and immigrants’ rights advocacy.
Hauwa Ibrahim, the first female lawyer in northern Nigeria’s predominantly Muslim Gombe region.was a Yale World Fellow, became an honorary citizen of Paris, and in 2005 earned the European Parliament’s prestigious Sakharov Prize for Freedom of Thought. By that time she had already taken on 90 mostly pro bono cases helping people (mostly women) get the right judgement in Shariah law. (The total today: around 150).
Roula Allouch is an attorney with expertise in employment law, civil rights and general civil litigation. She earned her juris doctor from the University of Kentucky School of Law in 2006. Allouch is the Chair of the National Board of the Council on American-Islamic Relations (CAIR). At CAIR, she monitors and analyzes policies and statements that foster discriminatory behavior toward American Muslims.

Hajia Zainab Shamsuna Ahmed
She is the Minister of State Budget and National Planning of the Federal Republic of Nigeria. She is also the Executive Secretary of Nigeria Extractive Industries Transparency Initiative (NEITI).Until her appointment Mrs. Ahmed was a Member of the National Stakeholders Working Group (NSWG) of NEITI and the former Managing Director, Kaduna Industrial and Finance Company. She holds a degree in Accounting from the Ahmadu Bello University, Zaria and Masters in Business Administration. Mrs. Zainab Ahmed is a member of Association of National Accountants of Nigeria and Fellow, Institute of Certified Company Commercial Accountants of Nigeria among other professional organisations.

NB: this list is nowhere near complete. There are millions of wonderful and inspiring women out there. For the sake of discussion, please share with us those corporate muslimah who inspire you in the comment section. :)
Posted by Khadeejah Opa at 3:47 AM